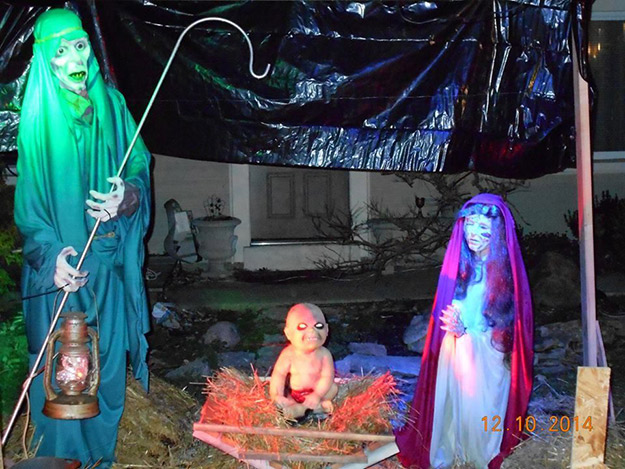 CINCINNATI — Talk about a nightmare before Christmas. An Ohio homeowner was ordered by town officials to remove a Nativity scene in front of his house that featured zombies instead of wise men and a baby Jesus.

“I wanted a Nativity and I worked with what I had,” Jasen Dixon, who manages a nearby haunted house. “The neighbors don’t like it. My father hates it and anything bad that happens he blames it on that.”

The Nativity scene features life-size figures and a zombie baby Jesus, with pale skin and pure white eyes. At night, the figures are illuminated by red and green lights.”I didn’t really pay it any attention until the different color lights came on, then finally the baby was put in the manger,” Dan Fluker, a neighbor, told the station. According to documents obtained by Fox 19, Sycamore Township, which is outside Cincinnati, does not allow structures to be located in the front or the side yard to occupy more than 35 percent of the area. Also, the primary structure must be 3 feet from the street, and 6 feet from the house.

Dixon, who manages 13 Rooms of Doom, says this is his second violation since the exhibit was put up. He indicated that his First Amendment right is being infringed upon due to the religious element.“I’ve lived here for 15 years and I’ve never had a violation of any kind,” Dixon said.  “It’s a holiday decoration.  I know if it was a real pretty Nativity scene they wouldn’t be saying anything.”

Dixon, who said about 40 people take photographs of what he calls “the world’s first zombie Nativity scene,” has until Dec. 26 to take down the scene. If he does not take down the exhibit, legal action will be taken. It is unclear if Dixon will fight the town, but when one person on his Facebook page urged him to keep the display up, he responded, “Dangers my middle name.”

“My new neighbors leave their dog outside in 40 degree weather with, literally, one foot of rope.”

“After a year of passive-aggressive and straight-up rude behavior, my roommate left me this card to sum up just how wonderful of a person she is. Safe to say we won’t be bunking together again next year?” - Anonymous

Neighbor Shame is a humor and entertainment blog in the Three Ring Blogs Network.