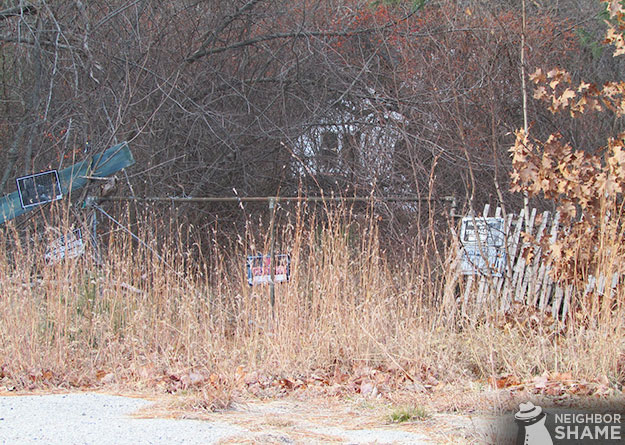 Yes, somebody does live here and the excessive use of ‘No Trespassing’ signs is concerning to say the least. There’s no way in hell anybody is going near there. This looks like the scene in horror movies right before people start dying…

CAUGHT NOT PICKING UP POOP

“I caught this lady that lives down the street not picking up her dogs poop (only saw one of the four actually take a dump). What the hell is she even wearing lol? SHAAAME!!!”

Well, they don’t call it the ‘Live Free Or Die’ State for nothing and these shameful neighbors aren’t letting that mantra go to waste. I suspect that a summertime drive-by would yield the same Holiday Decorations and trash.

“After a few years in court fighting with my neighbor over property.. we win.. But now i have to deal with her blocking my car every trash day.. UGH!!! We won our property back that she had her garden/ art crap on.. Now we just have to deal with her trash,, the cops wont do a thing.. i guess its ok to place trash in front of a car.. wait till i drive away and just dont look one of theses days.” 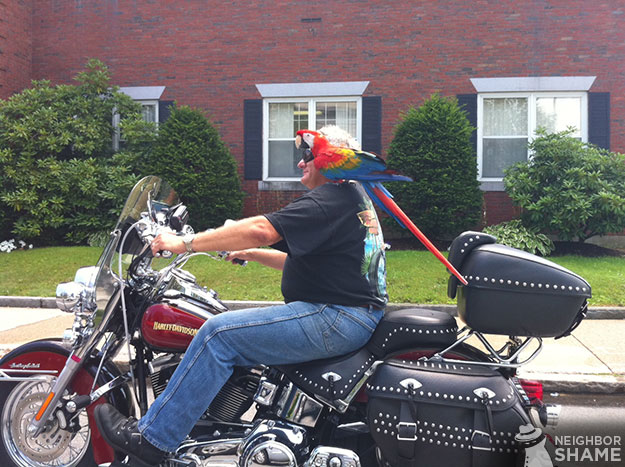 Formally known as the ‘Porsmouth Parrot Guy’ after some research, Myles Bratter was spotted over the summer by a friend of the staff riding his motorcycle in the Portsmouth, New Hampshire area. Here’s an interesting article we found about Myles Bratter and Rainbow:

Myles Bratter and his mild-mannered macaw, Rainbow, will attempt to make history this weekend in support of a local food pantry.

Bratter is trying to create a new record for driving around a race track with an untethered bird. He said he plans to try to make three laps around the race track; the distance and speed portion of the record will be determined by his ride. He said his plan is to be at the race track at 10 a.m., take pictures with people, and then have volunteers walk around the track and collect donations for both the Seacoast Family Food Pantry and the Speedway Children’s Charity.

“We’ve been taking pictures for almost 17 years now,” he said. “All the money we collected out there was going to a worthy cause.”

Neighbor Shame is a humor and entertainment blog in the Three Ring Blogs Network.